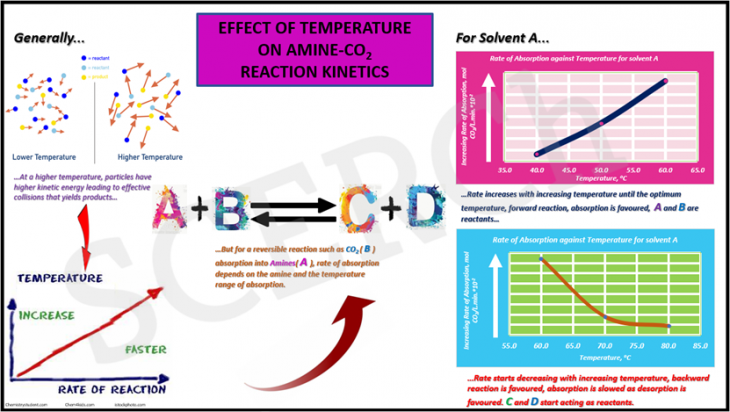 In general, rate of chemical absorption of CO2 increases with increasing temperature. This is because an increase in temperature will raise the average kinetic energy of the reactant molecules. Therefore, a greater proportion of molecules will have the minimum energy necessary for an effective collision that yields the product. This was observed in our experiments for the absorption temperature regime (40 – 60 ºC) as depicted by the graphical abstract.

Nevertheless, in reversible reactions such as absorption of CO2 with amines, described above in equation 1, the kinetics may change and the general observation described beforehand may differ with regards to the temperature under consideration. Hence, the inference that rate of chemical absorption of CO2 increases with increasing temperature is privy to the temperature regime of CO2 absorption. Considering the chemical equation described in the equation 1 above, the forward reaction comprises the reactants A and B. A and B being Amine(s) and CO2 respectively whiles C and D are the resultant products. An interesting phenomenon observed from our experiment showed that beyond 60 ºC, the rate of absorption decreases with increment in temperature. This implies, higher temperature regimes beyond 60 ºC favor the backward reaction, commonly known as desorption (. Hence from our experiments, the temperature range that favors the forward reaction (Absorption) is between (40-60 ºC) and above 60 ºC favors the backward reaction (Desorption) as depicted in the graphical abstract.