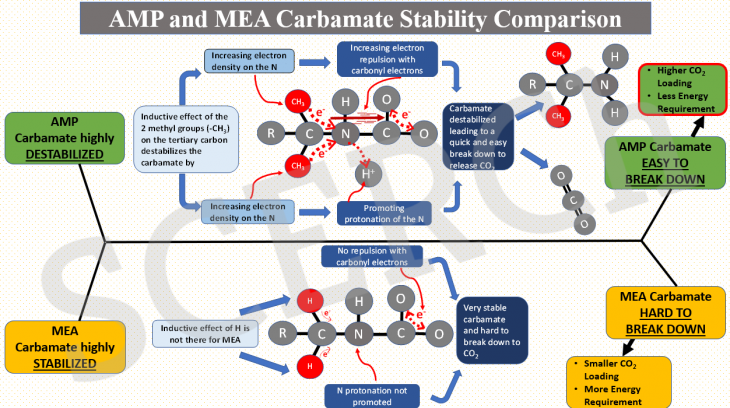 In this post, we explain why carbamate of sterically hindered AMP is unstable relative to that of MEA. The instability of AMP carbamate then leads to an easy break down to release CO2 and amine in the desorption process, thus giving rise to a higher CO2 loading and a lower desorption heat requirement than those of MEA.

This phenomenon causes AMP carbamate to destabilize by being exposed to

2)increased electron repulsion with the delocalized electrons on the carbonyl group whose effect destabilizes the carbamate and makes the break-down process more favorable.

In comparison to MEA, the 2 hydrogens (-H) on the tertiary carbon do not have the same inductive effect as seen from the methyl groups. As a result, the carbamate nitrogen reactivity is not enhanced by any extra electron density as seen in AMP carbamate. The instability effect triggered by electron repulsion with the carbonyl group also is not there.

The stability of MEA carbamate is therefore attributed to a combination of these 2 factors which then makes the compound break down process harder to occur compared to that of AMP. The CO2 loading and heat requirement as a result are higher than the case of AMP.