Effect of Intermolecular Interaction of Amine on Cp and ΔHvap 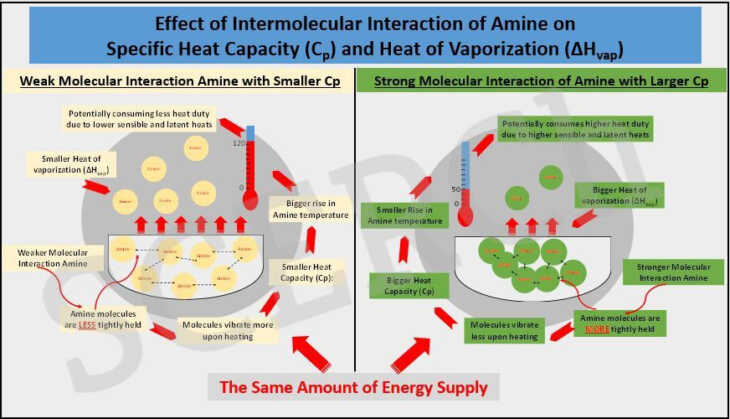 The knowledge of intermolecular forces and their strength between molecules of amines is a very important piece of information that one can use to determine the behavior of amines used for capture of carbon dioxide from industrial exhaust gases. In today’s what’s cooking post, we discuss on how the intermolecular forces that hold molecules of the amine together affect its specific heat capacity (Cp) and heat of vaporization (ΔHvap) which in turn, can affect the heat consumption of the amine process.

Intermolecular forces stem from the attraction of opposite charges that exist between molecules of a compound. Strength of these forces are highly dependent on the atomic and molecular arrangement of the compound’s molecule. Two major factors that have a direct impact on the strength of the forces are;

1. The molecule’s size of electron cloud and
2. The extent to which it can distort to form opposite charges on the molecule.

In general, an increase in the electron cloud size which commonly can be estimated by the number of electrons of that compound, increases the force strength. The same trend is also applied to the ability to distort the molecular electrons, which if increased, the strength of the intermolecular attraction will also increase. Our graphical abstract shows a side-by side comparison of 2 amines whose intermolecular forces are weak and strong, respectively. The amine molecules with weaker intermolecular interactions (e.g. smaller electron cloud and smaller electron cloud distortion) experience less attractive forces between them. As a result, the molecules are only held together loosely.

Such a situation provides the molecules with more freedom of movement which further facilitates the amine in the process of gaining kinetic energy upon the absorption of heat and allows the amine temperature to rise easily. This phenomenon is reflected in the amine’s lower Cp, an intrinsic property of amine that shows the amount of energy needed to raise the temperature of one gram of the amine by one degree of temperature. The heat of vaporisation, ΔHvap typically dependent on the connectivity strength of molecules also increases with an increase of the intermolecular force strength.

In comparison to an amine with stronger intermolecular forces (e.g. larger electron cloud and larger electron cloud distortion), the molecules are more attracted and more tightly bound to one another. The gaining of kinetic energy induced by the same amount of heat supply to the former amine to raise the amine temperature will therefore occur to a lesser extent in this case. So, a smaller rise in temperature is observed with a reflection of higher Cp and ΔHvap values.

The heat duty of an amine comprises sensible heat (required for temperature rise), latent heat (required for a phase change from liquid to vapor), and desorption heat. At least the first 2 heat components of amine heat duty will be affected by the strength of the intermolecular forces of the amine molecules. The stronger interactions in an amine will require more sensible and latent heats in the desorption process as compared to the weaker interaction in an amine. If heats of desorption of the 2 amines are approximately close, the stronger interaction amine will likely have a higher heat duty than the weaker amine.

Having a fundamental knowledge of an amine at the atomic level, for example, understanding the concept of intermolecular forces that exist between amine molecules, can definitely help one to pre-screen amines with the least energy requirement before further testing them to finally select the best amine.