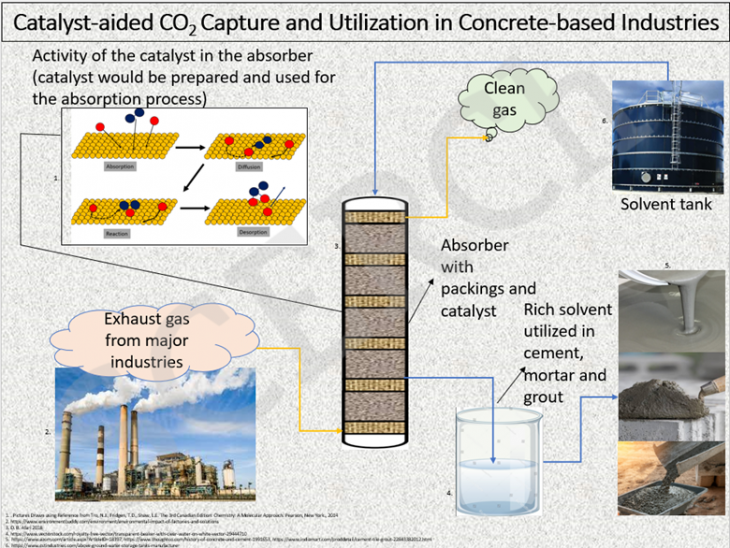 Though the post – combustion capture process by absorption – regeneration is the more mature technology in Carbon Capture Utilization and Storage (CCUS), its cost reduction is still necessary and requires immediate attention. The high cost in the capture process relates principally to infrastructure, energy and disposal of the CO2 captured.

If some of the infrastructure with its ancillaries could be removed from the capture process, then the cost involved in the capture process could be drastically reduced and the only problem would be how to dispose of the CO2 captured without re-introducing it back into the atmosphere. This work seeks to solve both the issues of cost reduction and the disposal of CO2 captured in an environmentally friendly manner.

In this work, a catalyst is being developed to accelerate CO2 absorption to boost CO2 loading in a novel solvent that is also being developed by the group. This catalyst, which is alkaline, would generate a catalytic pathway where a lower activation energy is required for the absorption process and provide a large inter-facial area for mass transfer. This would help the system to approach equilibrium faster than the non-catalyzed reaction, which would enable the use of a much smaller absorber vessel and a higher CO2 uptake level in the solvent.

The rich solvent would be utilized in the making of concrete, mortar and grout after it has chemically absorbed CO2 from the exhaust gas of major industries and power plants. In the concrete-based industry, the rich solvent would replace the water component used during the concrete or mortar making process. Using CO2-loaded solvent facilitates CO2 utilization in the concrete-based industries. This would help to accelerate the curing process leading to the complete curing of the concrete.

By this approach, CO2 will be captured using a smaller absorber vessel, the regeneration (desorption) section of the capture process will be eliminated as well as its ancillaries and energy requirements, and CO2 will be utilized and permanently stored in the concrete, mortar and grout.