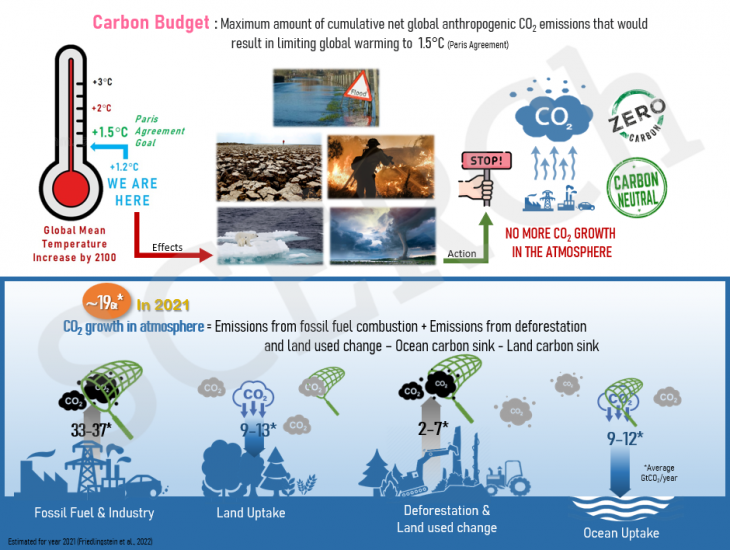 In the pre-industrial era, the amount of CO2 released into the atmosphere due to the natural geological processes was almost equal to that of sinking back to the land, vegetation, and ocean. It can be said that the carbon cycle was balanced. Due to human evolution especially in the industrial era, human activities create CO2 much faster than natural geological processes, leading to an imbalance of the carbon cycle that directly affects global warming and climate change. Previously, scientists argued that the global temperature rise must be kept below 2°C by the end of this century to avoid the worst impacts. However, with heavy emissions of CO2, the temperature rise should rather be kept below 1.5°C (Paris Agreement) which is now considered as a far safer temperature limit for the earth.

As shown from the top part of our graphical abstract, the carbon budget term is used to quantify the amount of additional carbon we can add to the atmosphere before the global temperature reaches +1.5°C. According to the latest annual update of the global carbon budget for 2021, the concentration of CO2 in the atmosphere has already reached 414.7 ppm or 50% above pre-industrial levels, which gives rise to about 1.2°C warmer temperature than that observed in the late 19th century. With the current rise rate of temperature, the carbon budget remained before the 1.5°C rise reached is only 360 Gt CO2. This would mean if CO2 emissions are allowed to still occur at the current rate we have, it will only take 10 years for the global temperature to rise by 1.5°C. This scenario is undesirable and must be prevented. Also, having carbon budget of 360 Gt CO2 does not mean that it is ok to still keep emitting the CO2 to the environment as long as the threshold limit is kept. CO2 will always give adverse effect to human and the environment regardless of its amount being released.

Our graphical abstract also shows the averaged global carbon cycle perturbing by anthropogenic activities for the decade 2011–2020 (GtCO2/yr) (Friedlingstein et al., 2022).  The amount of CO2 emitted from fossil fuel and industry is enormously high (33-37 GtCO2) compared to those from deforestation and land-used change (2-7 GtCO2), while the ability of nature able to sink the CO2 into land and vegetation (9-13 GtCO2) and ocean (9-12 GtCO2) is not sufficient to balance the cycle. Therefore, approximately 19 Gt of CO2 still remains in the atmosphere whose amount then reduces the global carbon budget year by year. To prevent the CO2-induced climate change effect from being further aggravated, the amount of CO2 released into the atmosphere should be minimized as much as possible or even cut down to zero. This will surely get us to become a true carbon neutral or net-zero carbon society which is regarded as the best effective scenario to fight against global warming and climate change.

As noticed in the article of Global Carbon Budget 2021 (Friedlingstein et al., 2022) a large quantity of CO2 is emitted from fossil fuel combustion. Thus, one best option used to effectively cut down the CO2 is to stop producing electricity from fossil fuel burning. However, this option is quite difficult to achieve on a global scale because a constant increase in demand for power and electricity for human living still relies heavily on fossil fuels (e.g. coal, oil, and natural gas) as the main source of energy (i.e. more than 80% of the world’s energy). Due to this, the next best option must be considered which is done by integrating the CO2 capture process as part of the fossil fuel-based power generation.

This can also be done in conjunction with cutting down the consumption of heavy emitter sources like oil and gas but increasing lighter emitter like natural gas in the power production process. Incorporation of renewable biomass to the power production must also be done to reduce the amounts of fossil fuel used to minimum possible. Combination of all these will surely help us move more quickly towards becoming a carbon neutral or net-zero society mandated for safety for human and environment.