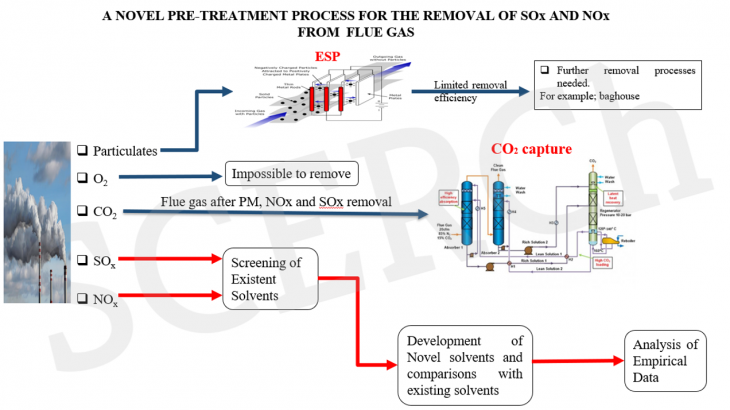 Among the most developed CO2 capture processes is the amine-based chemical absorption process. Nevertheless, implementing the amine-based chemical absorption technology in industrial processes such as fossil fuel power plants, cement production, iron, and steel industries face the challenge of accelerated solvent degradation in the presence of trace components of particulate matter (PM), O2, NOx, and SOx.

Upon degradation, the concentration of the solvent is reduced hence the need to replace the degraded solvent. This increases the operating cost of the CO2 capture plant. In addition, nitrosamines and nitramines products resulting from the degradation of amines in the presence of NOx have been reported to be hazardous and carcinogenic, hence, poses a threat to human health and the environment (Vega et al., 2018; Selin, 2011). Also, beyond the associated health problems, PMs are responsible for causing clogging, fouling, erosion and corrosion of downstream process equipment (Acharya, 2018).

While O2 is almost impossible to be removed from flue gas streams, technologies such as electrostatic precipitators (ESPs) and cyclones have been employed over the years to get rid of particulate matters. However, due to the limited removal efficiencies achieved with the use of ESPs and cyclones, additional treatment processes are needed for the further removal of PMs from the flue gas.

This current work focuses on a laboratory exploration to develop a solvent to pre-treat the flue gas by selectively extracting the SOx and NOx prior to the CO2 absorption unit. Through this work, solvents will be screened for rigorous analysis upon which an optimum solvent will be formulated either as a blend or a newly developed solvent. Furthermore, empirical data collected during the research will be evaluated to study the performance and kinetics of the developed solvent.